A Day in Mostar

Bosnia & Herzegovina is a small country in the Balkans which is mostly landlocked except for a very tiny stretch of coastline. The country has had a troubled history, having plagued by numerous wars over the past century – initially with the Yugoslav wars and then the Bosnian war which took place as recently as 1995. In the last couple of decades, the country has made a huge effort to restore things to its past glory. In comparison to its neighbors – Croatia and Montenegro, the tourism in Bosnia & Herzegovina has not taken off much. Though, many visitors are now discovering that this country has its fair share of hidden gems – the stunning mountain scenery, its rich history and a unique culture.

Bosnia is definitely worth visiting for a few days during a trip to the Balkans. The 2 most popular destinations include Sarajevo and Mostar. Most tourists choose to visit Mostar as a day trip from Dubrovnik. During our trip to the Balkans, we decided to visit Mostar for half a day while driving to Split from Dubrovnik (We would have loved to spend a couple of days but it was not possible with our already hectic itinerary).

Stari Most, literally meaning “Old Bridge”, is the most iconic and popular attraction in Mostar. This bridge across the Neretva river acts as a link between two parts of the Old Town and was originally built in the 16th century Ottoman era. It stood tall for more than 400 years until it got destroyed during the Croat-Bosniak war in 1994. It has since been reconstructed and is now a UNESCO World Heritage structure.

The bridge gets quite crowded at most times, so take your time to walk across and take in the views of the Old town. You will also find a bunch of divers ready to take the plunge and dive into the chilly waters from the 24m high bridge, if you pay them some money. Keep in mind, visitors are not allowed to dive off the bridge, unless you get a training. 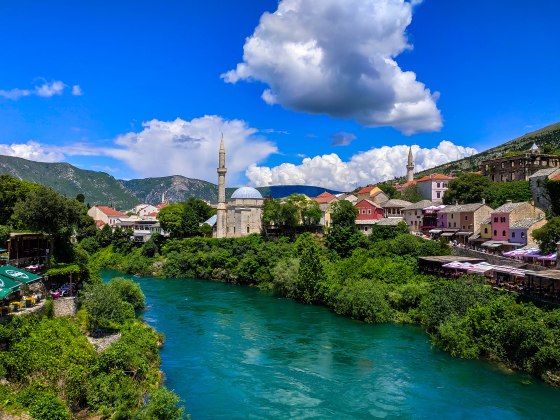 For good views of the bridge, you can walk down to the riverbank or head into one of the many restaurants along both the sides of the bridge. We chose Restoran Lagero which has a terrace overlooking the bridge. 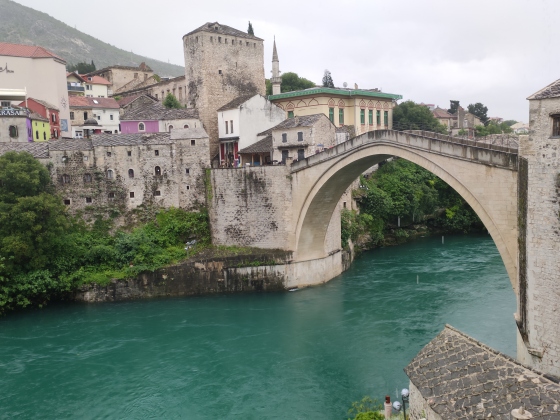 You can also walk to Lucki Most, a bridge 500m away for one of the best views of the bridge and the Old Town. 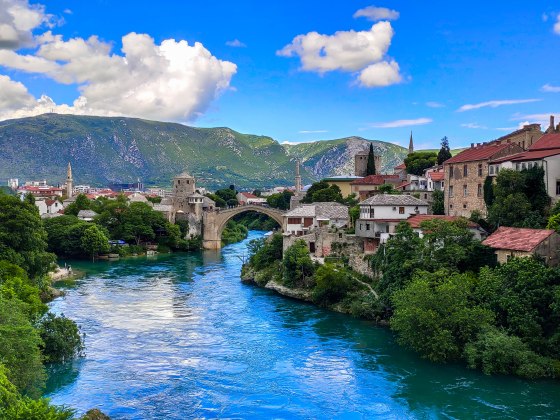 Old Town is a small charming part of Mostar with a few cobblestoned streets on either side of the Neretva River. You can walk the entire Old Town in less than an hour. You will find countless stores and boutiques selling copper offerings, all kinds of jewellery, authentic dzezvas (tea pots), terracota plates, pashmina scarves, traditional rugs etc. If you would like to pick up a souvenir, this is the place to do it!

Mostar has many beautiful mosques but the Koski Mehmed-Pasha Mosque situated along the riverfront is the most iconic. The mosque was also heavily damaged during the war and was reconstructed later. This is the only mosque in Mostar with the original wall paintings and decorations preserved. The entrance fee to the mosque is 3 euros. You can also climb up the Minaret tower by paying an additional 3 euros for a stunning view of the Old Town.

Blagaj Tekija is a 16th century Dervish monastery located about 15-20 min away from Mostar. What makes it unique and stunning is how well it sits at the bottom of a cliff, with crystal clear water from the Buna river flowing out from the cave. You can pay a small fee to enter the monastery but the real beauty of this place is best seen from outside. You can walk through the restaurants and over a bridge to the opposite side of the river to get to the best spot. Or, you can also pop into one of the cafes/restaurants and enjoy your food while admiring the stunning backdrop. 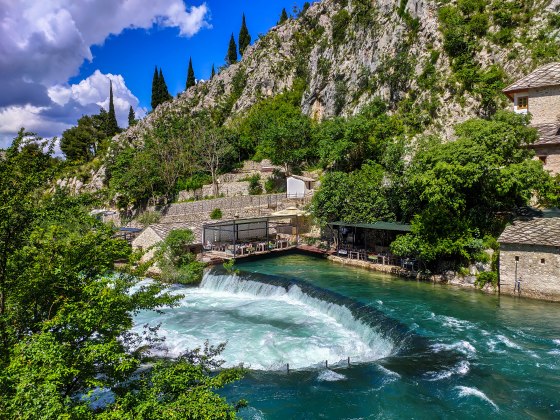 Optional: You can also choose to visit Kravice Waterfalls which is located an hour away from Mostar close to the Croatian border. We skipped this since it started pouring quite heavily when we were there.